In the summer of 2006 I traveled to Serbia to study the language in Belgrade and Novi Sad. While it was a language institute, the instructors recognized that language and culture are intertwined so I was fortunate enough to go on school excursions. On one excursion into the deep back woods of Serbia we stopped to visit a church. 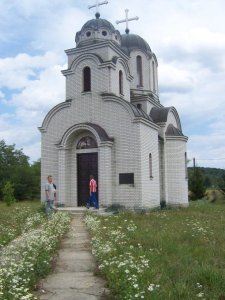 While we were waiting around afterward–actually, I think we were supposed to be listening to our tour guide but I’ve forgotten by now an old man came rambling up the dirt road. He had with him a glass bottle and a couple of dirty shot glasses. The bottle contained gasoline, though he claimed it was slivovitz. Throughout Eastern and Southeastern Europe, everyone (and I do mean EVERYONE) makes slivovitz. Slivovitz is Plum Brandy. It is ubiquitous with the culture, so much so that one morning while visiting a family they asked if I wanted some coffee and I said yes, and they gave me a glass of coffee and a shot of slivovitz because, ya know, that’s normal?

Anyway, everyone gathered around this stranger and started drinking slivovitz with him and before you knew it the bottle was empty and he was gone. I had one glass of it and immediately ran to a blackberry bush and started eating blackberries in the hopes of putting out the terrible burning spreading throughout my body.

What’s the point of this story? Well, me and slivovitz have never got along but I’ve always wanted to try to reach a point where we have a healthy relationship. Mrs. Wine purchased a bunch of plums to turn into baby food but never did anything with them so I made my own version of slivovitz today. Please understand I’m using the term very lightly here.

Immerse the plums in the vodka and then store in a dark, cool place for 2-3 weeks. I’ll probably leave it for 3 weeks. After the allotted time, strain the vodka into a new container and possibly add 1/4 cup of simple syrup to make it more palatable. But I’ll taste it first to see if it needs that. 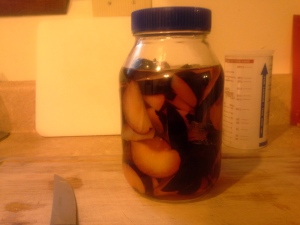 One thought on “Slivovitz”